the "personal" in making jewellery, which sometimes rises from an inner impulse, seems to be the most valuable characteristic, and that's what i want to find for my jewellery. the original idea for a piece of jewellery can transform during the work into something completely unexpected. the process should always stay open. where does it come from what am i doing? where will it go? there is falling something into me, and that it can fall in, i have to be empty. is it possible to be empty? free from thoughts? from the surprises during the work process, which I recognize as a gift, my work is developing. 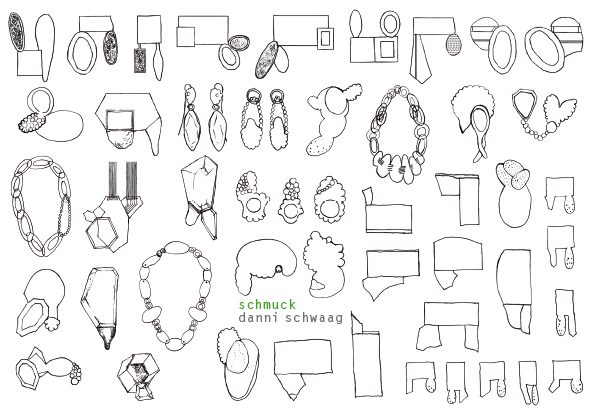 Everything is art,
nothing is jewellery *

Brooch, necklace, bracelet, ring  these terms are generic, encompassing the classical repertoire of jewellery forms, and serve to denote what is decorative, adorning and sophisticated. For thousands of years the possession and wearing of jewellery was an expression of wealth, symbolizing membership of the upper echelons of affluent society. More recent social changes in the 20th century have called these status symbols into question, in some cases even disparaging them. Linguistic use has even transformed the accepted interpretation of jewellery as a sophisticated, expensive item into something which is derogatory  bling, for example, a term used to describe jewellery which is vulgar and gaudy.
During the social upheaval of the 1960s attitudes to jewellery design were re-thought  decorative pieces came to embody much more than just precious metals and stones. Jewellerys indicators of social identity-building changed; its function became unlimited, aligning itself to other forms of artistic expression 1. The generic terms remained the same but jewellery, however, became something completely different. Since this era jewellery has been viewed as more than a financial investment, addressing itself to those who understand its new message. Jewellery as a contemporary art form was born.
The major breaks with tradition began in Europe in a small number of jewellery-making centres. Jewellery was viewed in a new context and non-precious materials were now acknowledged to be jewellery compatible. At almost all the relevant institutions of higher education in Germany  some of which classified jewellery design as a craft and others as a fine art  the original, socially influenced revolution in jewellery design was expressed in the vocational training on offer. Within the context of the differing approaches new centres of jewellery design developed. They were, on the one hand, classic training centres for goldsmiths with their corresponding academies or universities such as, for example, Hanau, Pforzheim or Idar-Oberstein and, on the other hand, the art schools in Düsseldorf or Munich. In global terms Amsterdam, Vienna, Zürich and Barcelona in particular distinguished themselves with nuanced attitudes to the art of jewellery and varying approaches. Exhibitions also contributed to the promotion and spread of contemporary, artistic jewellery. The annual Schmuck exhibition organized by Munich and Upper Bavaria Chamber of Crafts and held in Munich has been particularly influential in this regard, attracting the Whos who of the international jewellery design world. Fairs held at museums have also become increasingly widespread  for example the long-standing Grassimesse in Leipzig, which takes place in tandem with the more recent Designers open show for applied arts, or the Kunst und Handwerk fair held at Hamburgs Museum für Kunst und Gewerbe. The Hamburg fair has achieved a European status going beyond national boundaries. Such fairs and exhibitions provide a growing platform for jewellery as an expression of art. The link between art school presentations and fairs is an interesting one  the coexistence of experimental and established perspectives is a mutually enriching one.

Initially a goldsmith
Danni Schwaag has been working with jewellery since 1998, initially training as a goldsmith, which taught her the classic techniques of the jewellery craft. She was first introduced to the concept of creating jewellery, which views jewellery in other, freer contexts, while a student in Idar-Oberstein studying for a degree in Precious Stones and Jewellery Design (affiliated to Trier University of Applied Sciences) under her teacher Professor Theo Smeets, himself a graduate of the Gerrit-Rietveld Akademie in Amsterdam. While she is not a member of the original revolutionary generation of artists who provided contemporary jewellery with enormous stimulation and its artistic character thanks to their questioning of its social representative context 2 she is, however, a member of the successor generation, which was able to fully immerse itself in what had become a wide-ranging spectrum of interests within the context of jewellery creation without the constraints of accepted conventions.

Why Idar-Oberstein? Her conscious choice of the town represented a step on the journey towards achieving a specific goal  to immerse herself in an affinity with unusual materials which she had felt from an early age.
Idar-Oberstein, located in Germanys Rhineland-Palatinate region, has a long tradition as a centre for precious stones and today goldsmiths and jewellery designers still buy their gems there or send them to be cut. The town has, however, also experienced the vicissitudes of fashion trends and changes in taste, frequently having to re-invent itself to accommodate new market demands and changes in fashion trends and preferred materials. Numerous vestiges bearing witness to the influence of past fashion jewellery eras can still be found in Idar-Oberstein today  a veritable treasure trove for Danni Schwaag with her feel for form and materials. Often the inspiration to examine past and present definitions of what is decorative was provided by items which were unwanted  because no longer current or in line with the market  such as cameos; buttons made using galalith, a synthetic material based on milk protein, and, above all, reconstructed stones  so-called semi-precious gems made using resin containing a proportion of genuine gemstones. In addition to an affinity for the materials she also loved the techniques, in particularly enamelling, with which she was already experimenting intensively in Idar-Oberstein. She was able to develop this skill further under her teacher Ramon Puig Cuyas at the prestigious Escola Massana in Barcelona within the scope of an Erasmus scholarship.

Intuition  Finds  Rediscoveries
Danni Schwaag had already developed her own signature design style while at art school. Taking a material as her starting point she opens her senses to its physical and form characteristics. For her thesis (2008) she selected mother of pearl, an extremely ­brittle material which is difficult to work. The thesis is entitled intuition and Danni Schwaag worked her way, as it were, through the material. A single, intact shell was the inspiration for her work. She re-interpreted the concept of pearls by alluding to them will still, however, retaining a connection to the material itself. The result was, in particular, to accentuate the visual and haptic qualities of mother of pearl. Single small, flat oval or round chain links were sawn out of the whole shell before being combined with the contrasting materials of wood, enamel and gold to create a harmonious new composition. The tones of the iridescent mother of pearl and the dull wood complement the cool shine of the enamelled copper to form a balanced, coherent combination of colours and materials. She was able to successfully realize a completely new re-evaluation of these materials.
Another design element of her work is its illustrative quality, which is clearly apparent in the variations of shape of a series of rings, also made using mother of pearl. Devised and drawn in a wide range of designs the actual pieces retain the almost two-dimensional feel of the original sketches. The aspiration to realize perfectly crafted pieces, undoubtedly a legacy of her craftsmans apprenticeship, is also apparent in her later free designs. By sensing and penetrating the materials and giving expression to the forms they contain she is manifesting her own signature design style. As a result she has also experienced a great response to her work, with invitations to put on shows at international galleries or to attend symposia in European centres of jewellery design such as Bratislava, Kremnica or Turnov.
A key element in Danni Schwaags designs is the inspiration generated by things she finds. A new element can be the starting point for surprising results. The jakop series of brooches (2010), P. 18, was created using fragments of broken tiles and ebony mounted on steel. These pieces appear to be almost a contradiction to the mother of pearl pieces  with strong colours and predominantly rough surfaces. Like jigsaw puzzle pieces they can be combined using decorative cording to form small pieces of architecture. The story behind the origins of the blu-men series of brooches (2011), P. 30, is typical of Danni Schwaags method of working. The inspiration for the series originated on a car journey, with a hand painted sign with the wording blu-men playing a key role. Out of a chance encounter Danni Schwaag developed an idea for series with the same name. In comparison to the more austere jakop series, the later series has a playful, poetic note. Fragments of broken tiles were also used for the blu-men series, however this time in a more graphic form supplemented with floral shapes; blossom-like enamelled copper discs and fragments of broken porcelain.
The series of the sketch-brooches, P. 36, illustrates the increasingly graphic nature of her work, with the sketches for the pieces applied to carrier materials using transfer sheets. Danni Schwaag experiments with a game of self-referentiality  sketches of jewellery are projected onto three-dimensional jewellery as ornaments.
The wide range of materials used for the sketch-brooches or the blu-men series recurred in the necklace entitled felder (2012), P. 39. Here she experimented with a concept of jewellery which views it as almost being a small sculpture. Going beyond the idea of wearable pieces this form of jewellery is not clearly dependent on a wearer.
With her series lart pour lart (2013), P. 42, Danni Schwaag has entered into another free artistic dimension, adding a new material to her repertoire; one which is a chance find. The material in question is acrylic paint; dried-out layers of paint are removed from the mixing plate before small fragments are used to create pieces of jewellery. This is another instance of her intensive exploration of a materials characteristics. Cut, polished and mounted finished the result is a new combination of materials. Its attraction is the unexpected but perfectly crafted amalgamation of the material elements, which combine to produce a surprising, almost astoundingly aesthetically pleasing effect. The process should always be free. Is it a coincidence, something that just happens to me? A still energy between me and the individual elements of the jewellery, is the way she herself describes her work in a self-characterizing statement 3. Danni Schwaags love of discovering, and passion for collecting new materials is boundless. Her studio has recently become home to a small collection of new finds  lobster feet and dried fish eyes. We await the results with bated breath.

* Slogan on a wall by Erika Jones (fellow student of Danni Schwaag and alumni of Trier University of Applied Sciences / Idar-Oberstein) pictured on the reverse cover of the book ThinkingJewellery on the way towards a theory of jewellery / SchmuckDenken unterwegs zu einer Theorie des Schmucks, published by W. Lindemann & FH Trier/Idar-Oberstein, Idar-Oberstein 2011

3 Danni Schwaag, excerpt from a statement concerning her thesis Intuition, 2008